Over the years, the Museo Civico delle Forze Armate has managed to recover and take care of dozens of objects sometimes destined for neglect if not oblivion. In addition, in agreement with other institutions we have carried out maintenance operations on numerous relics in order to restore their original appearance to visitors whenever possible.

On this page we share some of the most significant operations in recent years. 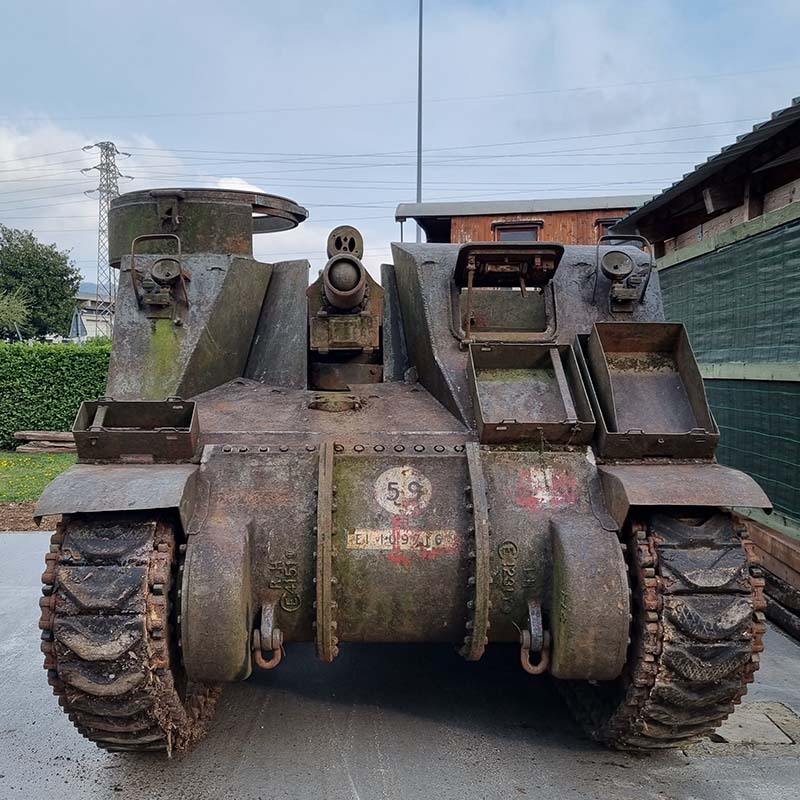 A recent recovery by the Museum involves a rare 1942 M7 model artillery self-propelled vehicle. The vehicle was used by the U.S. Army during World War II (almost certainly during the Italian Campaign) as a mobile artillery piece (it mounted a 105 mm howitzer). Later, it was acquired by the Italian Army and was part of an artillery unit.

Remaining operational until the late 1950s, the Priest was then donated by the Association of Artillerymen to the National Association of the Infantryman of Pioltello, which for decades displayed it at the headquarters of the local section.

In 2022, the Museum of the Armed Forces was able to come to an agreement with the Associazione del Fante di Pioltello to restore and enhance a piece of definite historical value that had been exposed to the elements for many decades.

The vehicle, which has been musealized, will thus be returned to the community.

In early 2022, the Museum of the Armed Forces 1914-1945 following a request from the Presidency of the Carristi d’Italia National Association, recovered and brought to Montecchio at the Svecom PE company, former rebuilder of the FIAT 2000, a rare Sherman tank model Firefly IC acquired at the time by ANCI, Verona section.

The tank, of Chrysler 1943 manufacture, served the British armored forces during the Italian Campaign of 1944-1945 and in the early postwar period passed to the Italian Army, which employed it until the 1950s. It remained at the Passalacqua Barracks in Verona for a long time, and about 20 years ago it was brought to Sant’Anna di Alfaedo where it formed a monument dedicated to the tank crews who commemorate a tank training area here during World War II.

Following a reconnaissance carried out in 2021 it was found that it was necessary to work to safeguard the vehicle, which, exposed to external events and vandalism, was internally in very poor condition.

Hence the request of the ANCI National Presidency, which, with the aim of restoring dignity to a now extremely rare vehicle (only about 20 examples are known worldwide) entrusted the vehicle to the Museo delle Forze Armate 1914-1945 through restoration operations by President Giancarlo Marin at the Svecom company. 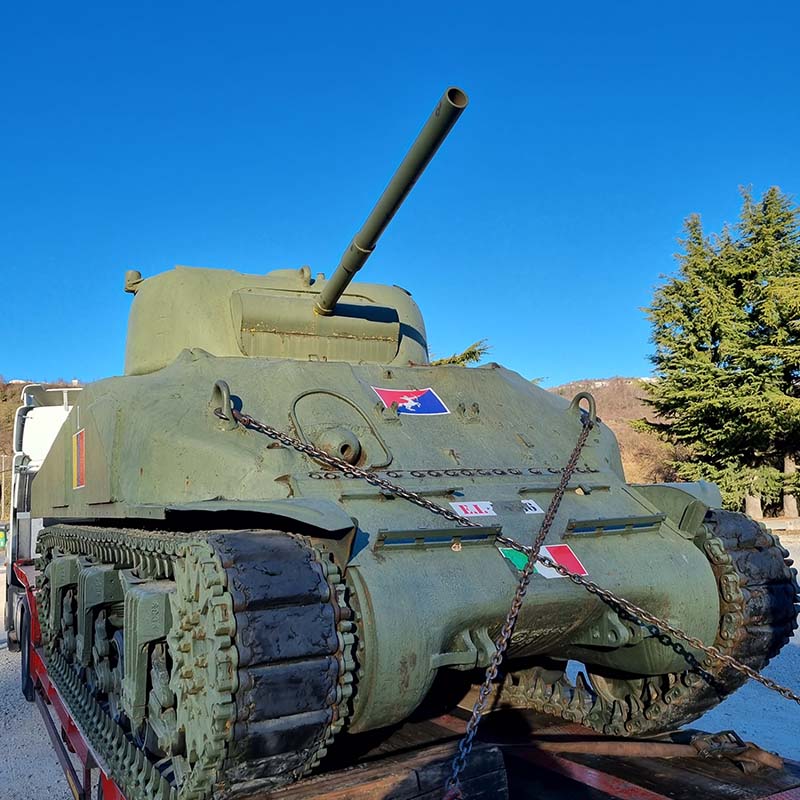 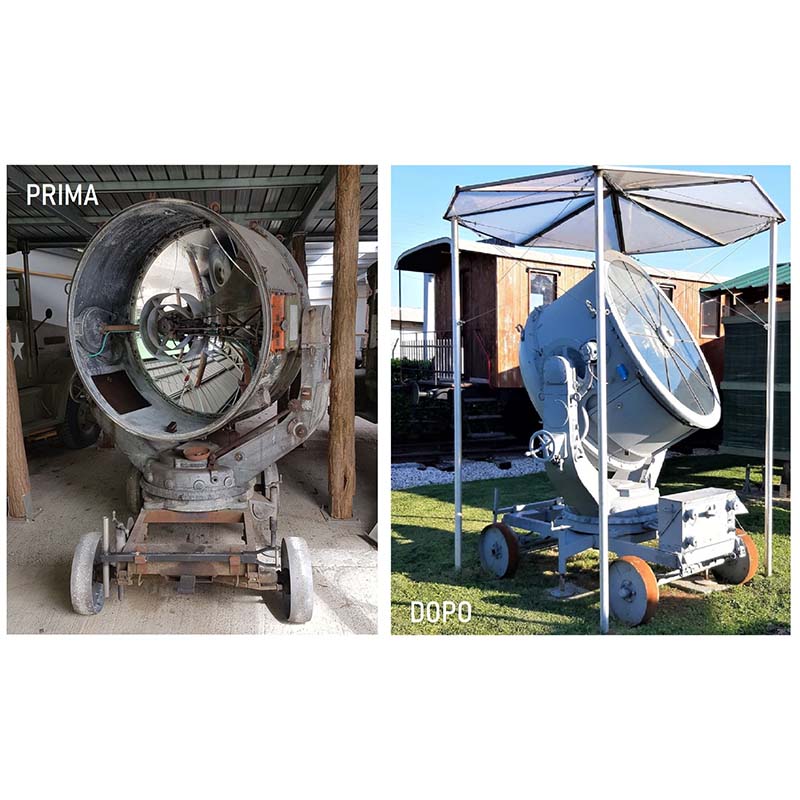 Produced by Officine Galileo Galilei the photoelectric served throughout World War II in the Venice area.

Weighing almost 2 tons, the mirror diameter measured one and a half meters and the lamp power was 19.2 KW with current intensity at 240 AMP.

Each photoelectric was composed not only of the searchlight but also of a pointing post, a listener and a generator set.

Searchlights were used massively for defense against night air attacks or for water control. Generally, a station consisted of three posts capable of illuminating up to 5 km away.

Pictured: the photoelectric before and after the major maintenance work.

The visible model, recovered by the ANMI of Schio at the Venice Arsenal in the late 1980s, is on display at the Museum following an agreement with the City of Schio with the blessing of the National Association of Sailors of Italy of the local section.

Locomotive arrived five years ago from Friuli where it was in a state of total abandonment.

Today we know that it is supposed to be the last surviving piece of four “sisters” built by StEG (first Austro-Hungarian locomotive factory) in 1919 for the Trieste Shipyard and destined for the Monfalcone plant.

According to the latest information found, it appears that the last service it performed, in the 1960s, was as a traction service for workers between the staging dock and the mess area. 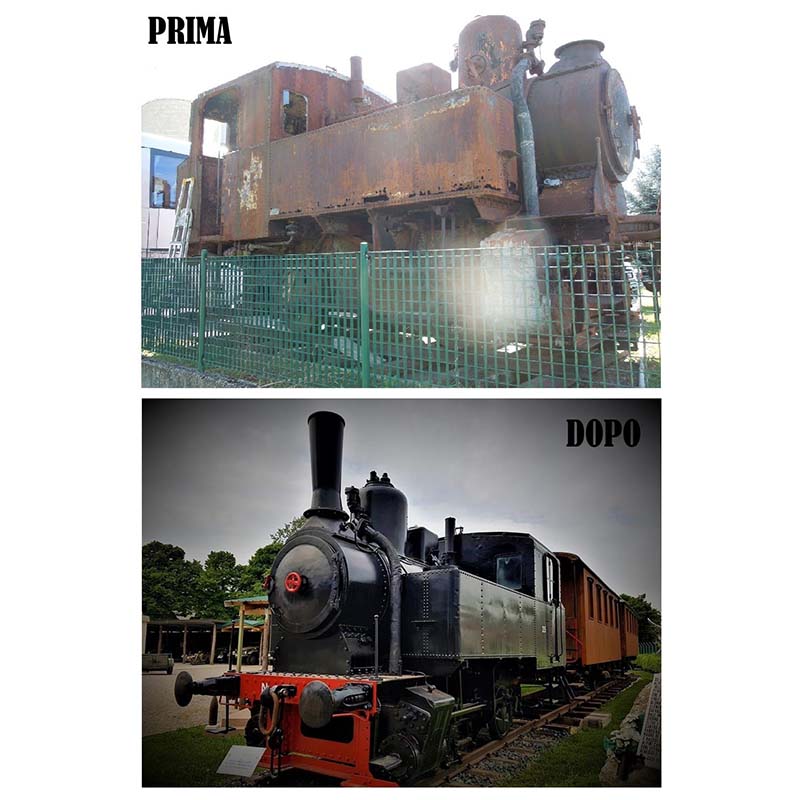